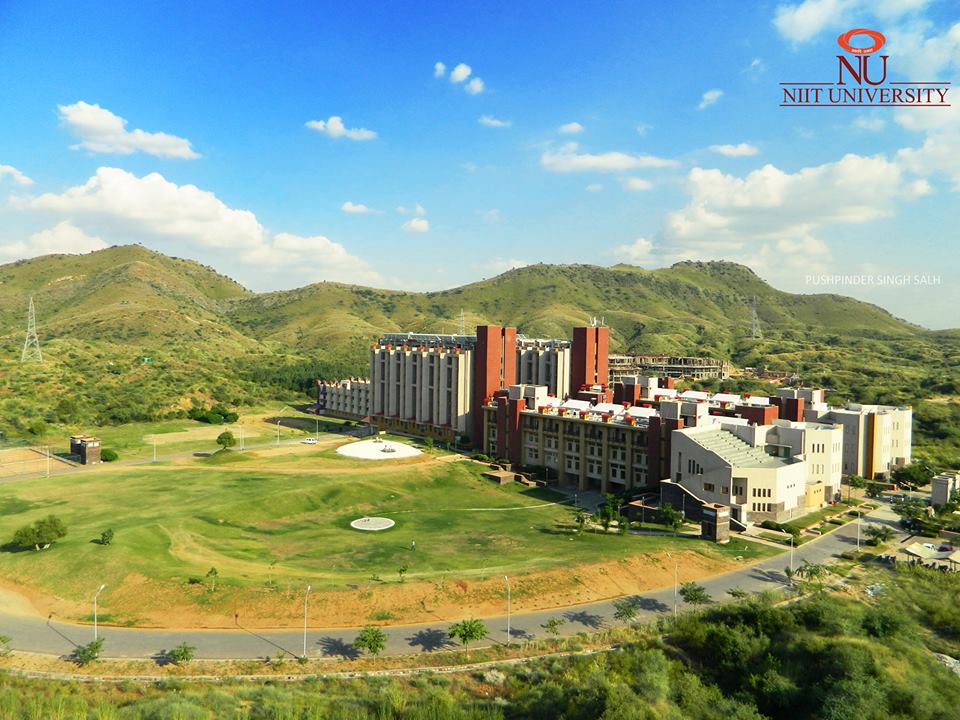 January 26th 2014, Nation was celebrating Republic Day & i was about to start the journey to Neemrana from Gurgaon for my Training.

I left home around 9:30 am so that i can reach Gurgaon before 11:30, the reporting time at NIIT, gurgaon. I reached their before time.  After some waiting & roaming around the NIIT Office we were offered with lunch. We left for Neemrana around 2:30 in the afternoon by bus.

A 95 Kms stretch with loads of Mustard Plant fields Spread on both side of NH-8 & many Under-Construction Flyovers.

I was sitting in the second last row of the bus with two students of my college. A journey of 1 Hour 30 mins got over with few little talks & listening to few songs. Around 4 in the evening, I saw hoardings of Japanese Zone & the bus took a Left turn to go to NIIT, Neemrana. A Chemical Company named as AJF was their. Around 100 Metres from the company, I saw the gate of NIIT University, Neemrana. Before telling more, i will let you know that Neemrana is part of Rajasthan. Even i was not knowing about this place when i was informed to go their.

When we entered in NIIT University the bus took us 500 meters inside the campus to drop us. This 500 meters had a lot of greenery, football ground & many sports area. After all this came the University Center. On the other side of the University, their was a Mountain which looked beautiful. The air was more cooler & fresh than what i felt in Delhi. The Sun was about to set, so their was a gleam on us.

We deboarded the bus & took our luggage. After few minutes we were broken down into batches & taken to a class room. A different class room not like the classroom i had in college. Our Mentor gave a short brief & he was looking like a very serious guy that day. We were also asked to introduce yourself. Few small speeches by other faculty & few document signature formalities.

After having the evening snacks, we were taken to the hostel & given Room Keys. A different feeling as i never used to keep key with me. It was dark & the hostel building & NU reception where my luggage was kept were very distant so it took a lot of efforts to bring those bags to the room which was allotted to me. During the shifting of the Luggage, two First Year Engineering students of NIIT asked me if i need any help & i replied them with a note of ‘No, Thanks’.  Few stretches in my arms & finally i was able to get those bags to the room on the first floor, as their were no lift in the UG Hostel it was more tough but still i was able to get the luggage in my room.

The room was like a Store Room, very small it appeared in the starting but was having all required things like Book Shelf’s, Racks, Almirah, Study table etc.  & all the stuffs were nicely placed.

After keeping my stuffs & taking rest for half an hour, i & two of my college mates decided to go for dinner. The atmosphere was becoming cooler. We entered the mess which was 100 Mtrs away from our hostel. The mess was full of students & one television which only shows videos as its full volume was not louder than 200 students voice. The mess was clean & nice. We took our dinner by 9:30 pm, the dinner was fine, or can say good, as you cannot get anything better than what we got to eat in the Hostel.

Later we 3 decided to go in our room & rest and we decided to wake up early around 5 in the morning. I had few talks with my family and later i was trying to sleep but slept late that day.

This was my first day at NU or can say the first 8 hours.

This site uses Akismet to reduce spam. Learn how your comment data is processed.