Love is like an uninvited guest.
Love will come when it wants to.
Love will leave when you ask more of it. ❤

That knot could open,
but you chose to cut it. 🪢

There was a smile in the pictures,
“why they are not on my face now!”, they asked.
They do not understand,
you were also in those pictures. 😐

If you live in India or have ever traveled to India in the second decade of 21st century, you would have found a lot of places having fancy street foods, specially, in the metropolitan cities like, New Delhi, Mumbai and Bengaluru.

If you exclude the posh areas of New Delhi and NCR(National Capital Region), and then walk on a very normal street/roads which connects welfare housing societies, you are likely to easily spot the following roadside options like, Ice-Cream tricycles, Open roof stalls of Sugarcane Juice, roasted corn and maybe the push-truck(thela) tickiwala(also called, Chaatwala).

An addition to this group is the roadside “Gol-Gappe”(also called PaniPuri). Now, what’s PaniPuri? It consists of a round, hollow puri, fried crisp and filled with a mixture of flavored water (known as imli pani), tamarind chutney, chili, chaat masala, potato, onion or chickpeas. The complete setup on which Gol-Gappe, Pani and other spices are placed is very easy to carry and move, and also can be quickly placed anywhere and can start selling it back. Now you are thinking, why I am writing about all this stuff? Here’s why. 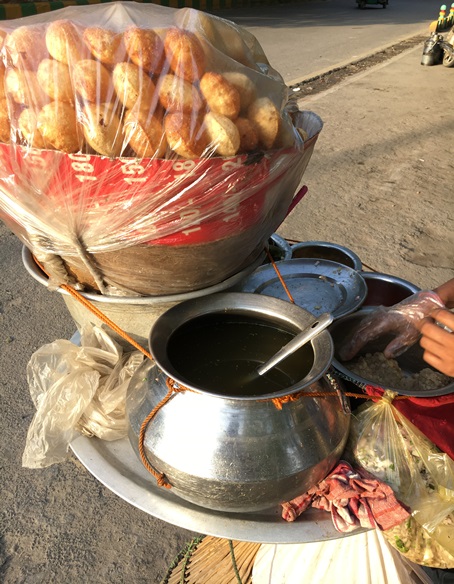 Every evening when I am traveling back home from work, in the last part of the transit I have to make a 20 minutes walk to get to my apartment. In these 20 minutes, starting from getting down from the auto, finding the Panwari(guy who sells Paan, which is made up of betel leaf with areca nut) and cigarettes(which is sold more than the paan these days), interestingly, his wife also sits during late hours to keep the business up. Some 200 steps ahead, I find the Ice-Cream tricycles from Vadilal, Kwality Walls, Creambell and newly famous Havmor, which is expensive to my pocket. 😛

After 5 minutes, I find a little boy selling Gol-Gappe at the corner of the right turn of the road. I walk towards him, and ask for the rates. He replies, “4 pieces for 10 bucks”. I said, “Can I have it?”, he offers me a dona(which is a paper bowl). The Panipuri tasted amazing!! 😀

Yesterday evening, I left early from work and while getting back home, I met the boy again. He is 3/4 of my height, considering I am not tall, so he looks short. He should be around 10-12 years of age. I asked him, “What’s your name?”. He replies with a smile, “Vansh Gupta”. I asked him if he goes to school, he replies “Yes, I go to school”. With a thought on how he gets time to study, I asked “When you study or do your homework?”, he says “during night, after having dinner”. 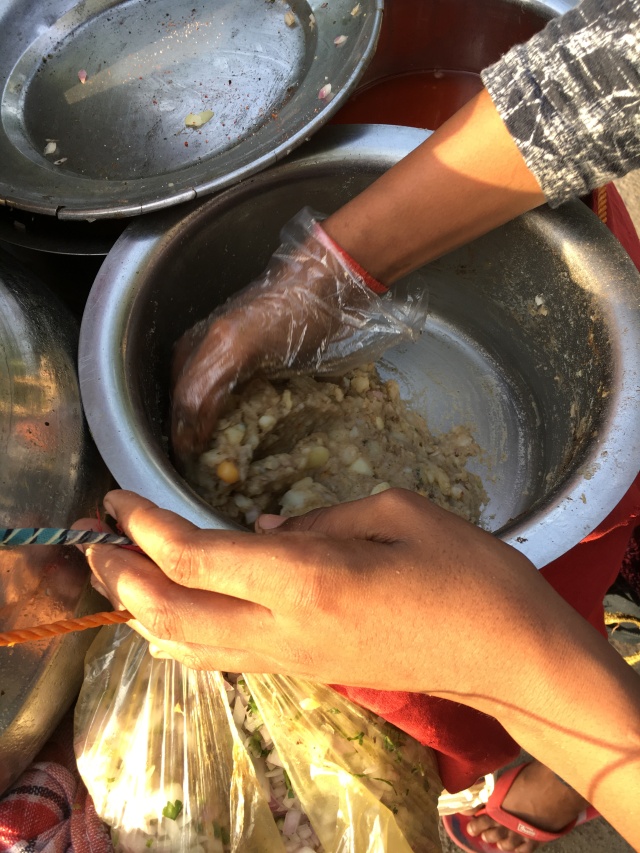 I asked him if I can take his picture which I will share on internet with my writing. He shakes his head with a smile. 🙂 I said “Okay, can I take picture of your setup?” And he says “Yes” this time. I also checked with him, “So, where are you from and who else are you in your family?”, to which he replies, “I am Mirzapur(in Uttar Pradesh), and here I have my father and brother who also sell Gol-Gappe, whereas my mother lives in hometown(Mirzapur)”.

He has friends of same age. They also sell Gol-Gappe. One is Rajkumar and another is Komal. I have ate Panipuri from them too. 🙂 Komal is the smart one, like a leader among these boys. I think he likes momos because I have found him eating momos a couple of times. Whereas, Vansh is the good-looking one. But they all are very simple and happy going boys. 🙂

At the age of 12, helping family to earn enough so as to get one time meal is really unbelievably appreciable. Just think about the sacrifices they have been making, like missing their mother, not playing outside in evening so that they help their father and surely not able to spend enough time to learn and study so that in future they don’t need to sell Panipuri.

The least you can offer is a Smile 🙂 to them, do not see them as someone lesser than you and just be good and motivate everyone around you. Life is not easy for everyone.

His heart tried to bury her deep.
Little did He know that She was a seed. ❤ 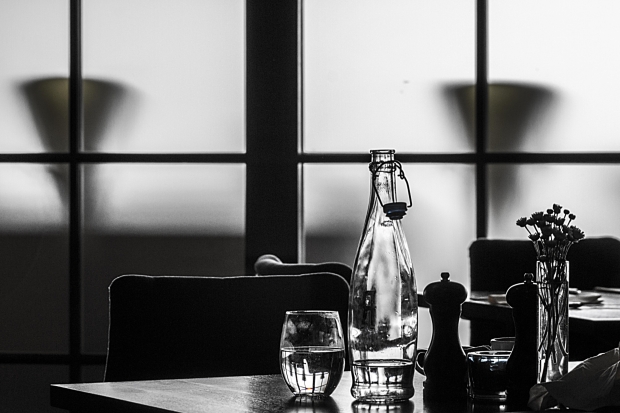 And the day he met her,
the ink of his pen was no longer filled with tears,
but with the happiness.. 🙂

I LOVE YOU means that I accept you for the person that you are and that I do not wish to change you into someone else. It means the I do not expect perfection from you- just as you do not expect it from me.

‘I Love You’ means that I know your deepest secrets and do not judge you for them – asking only in return that you do not judge me for mine. It means that I care enough to fight for what we have and that I love enough not to let go.

It means thinking of you, dreaming of you, wanting and needing you constantly, and hoping that you feel the same way for me.. 🙂

Trust is something I can have difficulty with. Once someone shows that they are not trust worthy, or betray my trust, It’s extremely hard to ever fully trust them again, and a lot of times I can’t. It’s a hard thing to trust someone, because it’s hard to ever fully know if you can until you do. People can let you down, and you learn that you can’t trust them, but all to often people expect you to.

How true are these words?
“Trust? Years to earn, seconds to break.”

Trust can be hard to earn, and can most certainly take years to acquire! Yet, once you have earned someones trust, it is an incredible feeling, and a precious gift. If you know someone trusts you, it really is a wonderful thing.

“Seconds to break”. How sad is it when someone breaks your trust? It can happen in an instant, and then it can take a very long time to even consider trusting that person again. Lost trust leaves a wound, and hurt to the person who was let down. Feeling such betrayal can be devastating. I know that for me, if someone breaks my trust, you can say that they’re on a list, and I will remember what they did before considering trusting again.Gaining trust is such a hard thing, but if someone is willing to work and gain your trust, that is a wonderful thing.
It’s good to think about this, because it is a big thing when someone betrays your trust, especially if they are close to you. Talking about it with them can help. As always, open communication is important in any relationship. So if it’s bothering you, letting them know can help.I hope that even if you don’t have people in your life that you can trust now, that someday soon you will be blessed with people you love and trust all around you!
To be trusted is a greater compliment than being loved.. 🙂
Loading Comments...